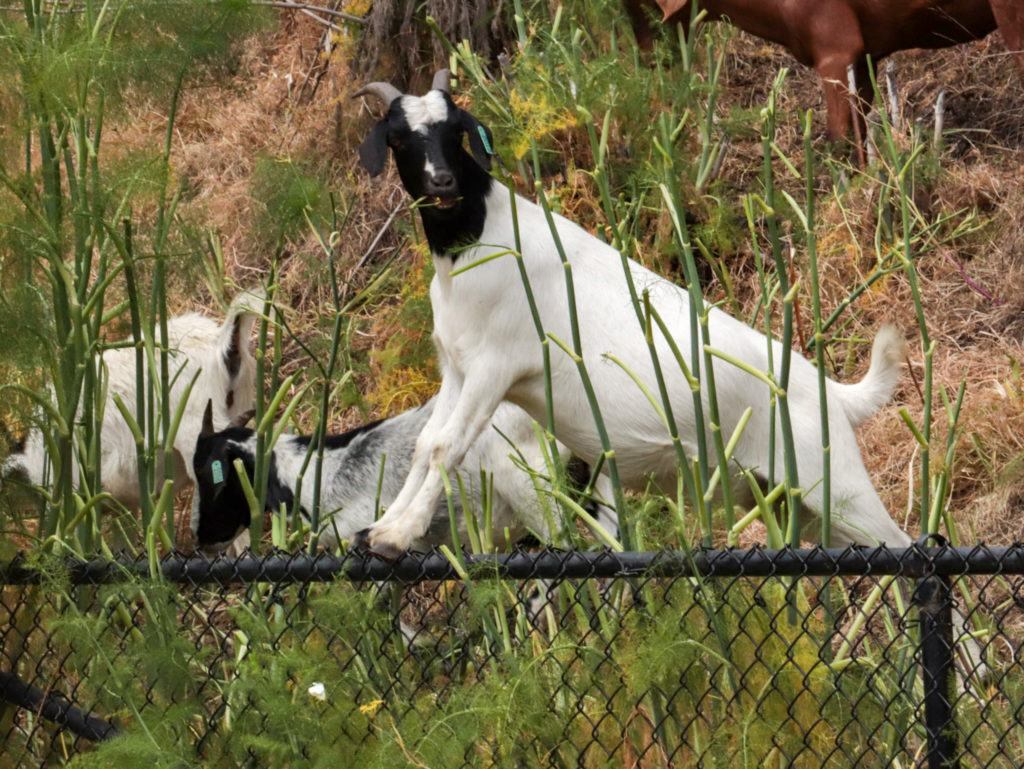 May 13th, residents of Rincon Hill got some surprise visitors when a herd of goats were dropped off by Caltrans District 4! The goats were brought in to clear weeds and brush from the slope near the Rincon Hill Dog Park, an area determined to be too dangerous to be serviced by Caltrans maintenance crews. The coordinated effort was the result of months of collaboration between District 6 Supervisor Matthew Haney’s Office, Public Works, Caltrans, and neighbors, and the solution not only efficiently cleared the brush but did so in an environmentally friendly, sustainable way. As a bonus, the goats worked quickly, clearing the desired brush and weeds in less than one day! The full Press Release, courtesy of Supervisor Haney’s Office, announcing the event can be found below.

San Francisco – This morning, trucks arrived in Rincon Hill to unload hundreds of goats to aid in weed-control near the Rincon Hill/Bryant St Dog Park. The goats could be seen by neighbors as early as 10am, grazing the steep hill by the I-80 that has proven difficult for workers to safely maintain.

Supervisor Haney was in Rincon Hill to greet the goats this morning: “The Rincon Hill Dog Park and surrounding area have been plagued by weeds and brush for a long time. This has created a very real risk of a brush fire and made it much harder to pick up trash in the area. It turns out that the safest and most sustainable, environmentally friendly way to clear the weeds is to bring in these new friends who also get a big lunch. I’m so appreciative of the neighborhood for asking for this, and to Caltrans for bringing the goats out, and to the essential workers here making it happen.”

For months, Supervisor Haney’s office has worked with Caltrans, neighbors, and the Department of Public Works to improve the conditions at the Rincon Hill Dog Park and surrounding slope and landscape.

At the request of Supervisor Haney and neighboring buildings, Caltrans had released a request for competitive bids in January to procure the goat services. In addition to the goats, Caltrans crews have picked up hundreds of cubic tons of trash over the last few months, including earlier this week

Deborah, a dog owner and neighbor who serves on the Board for the dog park, says “In a time when we are all concerned about the future of our city and our beloved dog park which remains closed until the City lifts the Shelter in Place Order reopening it once it’s safe, we can enjoy this bit of great news and thank all the folks at Caltrans and Supervisor Haney’s office who made this possible.”

Neighbors have long warned that the brush threatens to be the cause of a brush fire that could impact the entire bridge, and that the density of the weeds has made picking up trash coming off the freeway nearly impossible. The area has mixed jurisdiction: the City & County of San Francisco is responsible for the maintenance of some of the land, while Caltrans is responsible for the right-of-way adjacent to the freeway.