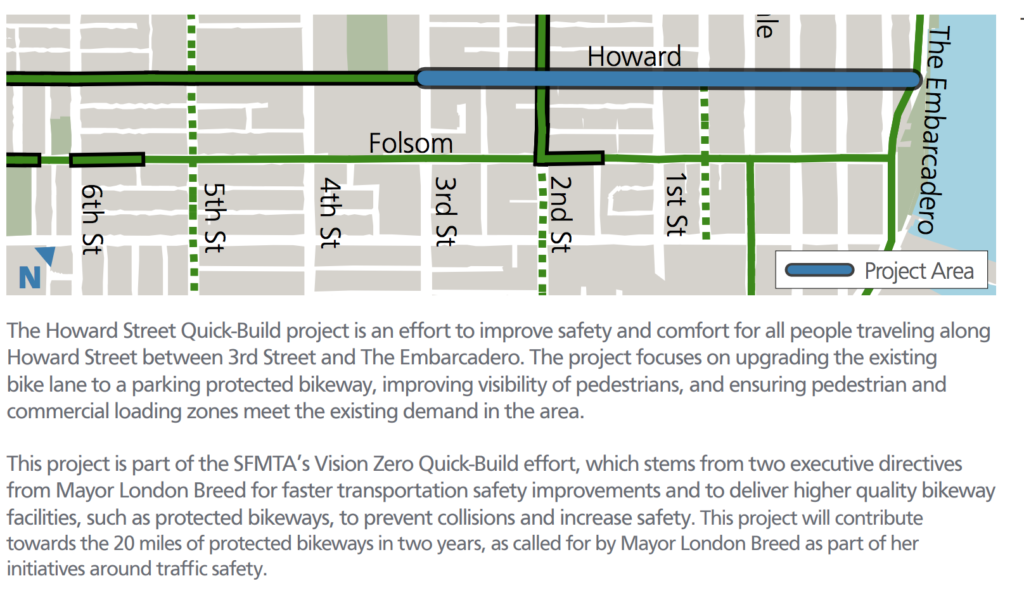 The SFMTA, as part of its Vision Zero Quick Build effort, will begin work on Howard Street between 3rd Street and the Embarcadero on November 16th, 2020. The work is expected to be completed before the end of the month and is part of the Howard Street Quick-Build Project. A summary of the project taken directly from the SFMTA website is below, along with a list of the project’s major improvements to improve traffic safety. Of particular note is that the project will extend the parking protected bikeway that currently exists on Howard Street between 11th and 3rd Streets to the Embarcadero as well as increase the number of yellow loading zones to improve loading for area businesses. Construction will predominantly involve scraping away the existing roadway markings and restriping the roadway and parking lane.

The Howard Street Quick-Build project is an effort to improve safety and comfort for all people traveling along Howard Street between 3rd Street and The Embarcadero. The quick-build project will include cost-effective improvements for bicycle and pedestrian safety and loading while also serving as a way to inform the design of the Transbay Howard Streetscape Project. The project will include a parking-protected bikeway, improved loading, and pedestrian safety improvements.

The project is part of the SFMTA’s Vision Zero Quick-Build effort, which stems from Mayor London Breed’s executive directive for faster traffic safety improvements on the City’s High Injury Network. It also builds on an additional executive directive to deliver higher quality bikeway facilities, such as protected bikeways, to prevent collisions and increase safety.

The current configuration and sense of safety along Howard Street indicate a need for upgraded bicycle, pedestrian, and loading facilities along the project corridor. Currently, the existing bike lane requires bicyclists to ride between vehicle traffic and parked vehicles and is frequently blocked by delivery trucks and vehicles picking up and dropping off passengers.

The proposed project will extend the existing parking-protected bikeway on Howard Street between 11th Street and 3rd Street by an additional ¾ mile to The Embarcadero, ensuring a consistent, predictable, and more comfortable transportation experience for all who use the street. Daylighting at alleys and intersections will provide more visibility between pedestrian and motorists and widened crosswalks will provide more space for pedestrians at intersections. Additional yellow loading zones will allow commercial vehicles to load at more locations and will be located with input from merchants and shop owners.

The project will implement the following quick-build improvements to improve traffic safety: